In case you’ve missed it, we’ve started a new series that will pop up here on the blog every Friday.

Recently I have been inundated with content about racism in every shape and form – from issues with mixed race parents or cross racial adoption to being asked to write about it on Heritage Day.  There is just so much that we could say on the topic as it’s still touches a very raw nerve in South Africa (and rightfully so).

Besides the odd intentional racist, I feel like a lot of the hurtful comments are actually just brought about through ignorance of how their words will affect other people.  Thinking only of our own personal situations with little regard for others, because that’s all that we know. So in an effort to broaden what we know, I thought I would interview a wide range of South Africans that have a variety of different situations – from mixed race couples to single race couples that adopt cross racially to couples that share the same “race” but differ vastly in terms of culture.  A bit of a mumble jumble of everything really.

So let’s get started!

I want this to be a safe space where we can share stories and encourage each other to be more accepting of our fellow South Africans of all races, cultures and situations.  So while I want to encourage you to comment and open a discussion, I will not tolerate any abusive or troll like comments here.

Life is such a funny thing sometimes.  Since our girls went to the same school together for ages, I’d seen Jo around a lot, but often running after kids is not really conducive to making new friends.  Then I posted the pictures of our girls doing ballet on a Moms group and we’ve been Facebook friends ever since.  Today you might notice that this is not a mixed race couple, but rather a mixed religion couple.  So take a read.

Tell us a little bit about yourself – what you do, what you like to spend your time on etc

At the moment I am ‘transitioning’ hoping to start a unique child care service called Drop n Shop. I just want to do something on my own. After teaching for 10 years I feel like change is near and the time is now! Like most mom’s I like to see my kids having fun and I love doing fun family things together. Providing I do get to relax a little and perhaps have a glass or 2 or 10 of wine!

Tell us a little bit about your partner – what they do, what they like to spend time on etc

My husband has his own construction company but is hoping to specialise and concentrate mainly on unique wall and floor applications. He plays hockey for a hockey club which is mainly a ‘let’s drink beer after running around a field for 90 minutes club’. They are all getting on now and there is even a youngish grandfather in the team!

Give us a bit of insight into your racial/cultural backgrounds.

I grew up in a divorced home. As an only child that was quite lonely at times. My parents are both Jewish and I went to a Jewish primary school which I wasn’t overly fond of. I found it too narrow minded, too Jewish funnily enough. I always wanted to mix with others of different religion and race and was over the moon when I went to more of a mixed high school and made friends with the rest of the world! My parents weren’t very religious and we used to spend most of the holidays and the Sabbath on Friday evenings with my grandparents who were quite into it so to speak. When my dad re-married, we celebrated the holidays more as his wife had spent some time in Israel and felt it important to observe the special days with her 3 children and I. I don’t go to the synagogue unless it is for a wedding or another special occasion.

Graeme was raised in a Christian family (2 younger sisters) who are also not religious. They mainly observe Christmas and Easter with a family meal. He doesn’t go to church unless to a wedding or funeral.

Ryan is 9 and Jada is almost 6. They are bright and just the sweetest kids. Mostly well- mannered and just a delight. Of course they drive me bonkers at times but that is normal I guess. Ryan is sport crazy and spends most of his afternoons on a field, playing cricket, hockey or soccer which means I spend most of my afternoons on the side of these said fields. Jada is into ballet, singing and doing handstands. More of the creative one. They are both very different but are crazy about each other. Ryan is very protective and Jada wants to marry him!

(Editors note: Our girls actually went to school together and Kyla was devastated that Jada left the school to go somewhere else for Grade R.  Her face when they were reunited at ballet was just priceless!)

How do you and your partner view religion in your relationship? What kind of role does it play in your family? Does it even feature?

It is very simple. Basically I celebrate the Christian holidays with him and Visa versa. He took a while to understand the different Jewish traditions but has learnt a lot over the years! In everyday life, our religions hardly feature.

We have had the odd disagreement about religion but I think we both have a pretty similar outlook. If you are a good, honest person, love and provide for your kids and are a good parent that is really all that matters. That is our religion. We have both come across religious people (of ALL religions) over the years that don’t live up to what they preach so it has turned us off a bit.

How have your families reacted to your relationship?

Our families have been very accepting. Graeme never wanted to convert and I never expected him to. We also had no pressure from my family for him to do so. When it comes to special days, we don’t often mix festivities. Neither party ask too many questions about each other’s celebrations and we just get on with it.

What kind of experiences have you or your partner had when challenged on this topic?

We have never really been challenged. People sometimes just ask what religion the kids are (Jewish because the Jewish faith follows the maternal line) about what the kids think and how we split the holidays. My answer is always the same. What (from a kid’s point of view) can beat a man in a red suit and a white beard that brings tons of presents? And chocolate in the shape of a bunny? Get my point? 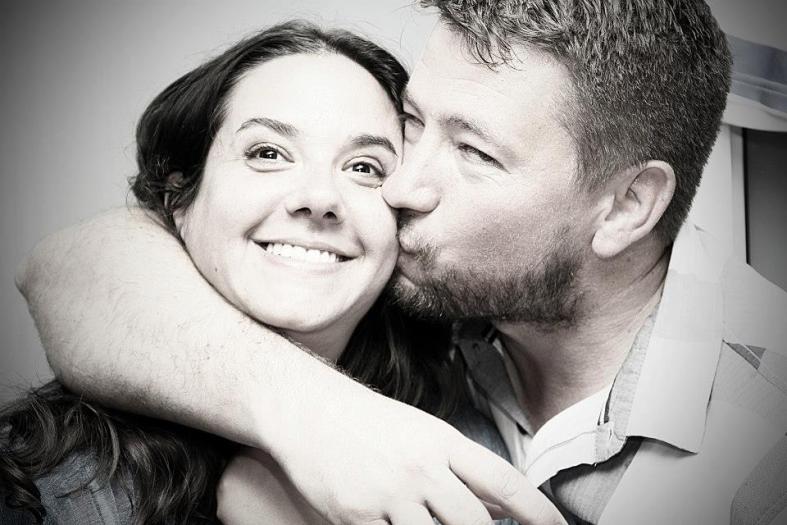 What are some of the ignorant and hurtful things that have been said to you and your husband about this issue?

I don’t recall any hurtful things to be honest. People are more interested about the logistics of it all.

Do you have any advice for those new to this experience?

My only advice is to do what makes you happy. I believe no religion should ever stop you from marrying who you want to marry. If it is right, things will fall into place. The relationship is way more important than the religion. That’s my view, anyway.

Thank you Jo for joining in on this series!

If you’re in Cape Town and want to stand up to racism in our City take the pledge here.

If you would like to join in and be featured in this series or know of someone that would, please feel free to get in touch with me on cindyalfino@gmail.com.