I’m sure that as a parent you know that sometimes you can get it so right.  The kind of right that leaves you doing a little victory dance in the passage and then sometimes you just get it so very wrong.

If you’re new around here, you’ll know that getting it right might happen to us occasionally, but it’s certainly not as entertaining as stuffing it up.

Yesterday we spent the afternoon celebrating Seth’s grandmothers 80th birthday.  It was a beautifully hot and windy day at Suikerbossie and the kids spent the entire day running around like crazy.  By the time we left at 4pm everyone was buggered.

When they all fell asleep in the car at 4.30 we did a little nervous giggle.

4.30 is possibly the WORST time that they could fall asleep, too early to continue sleeping through the night (considering that they missed supper) and so late that if they woke up, the chance of them sleeping again at a reasonable time is like trying to force a snail to sing a griping rendition of Shake It Off.

So when we pulled into the driveway at 5pm and they all still looked like this: 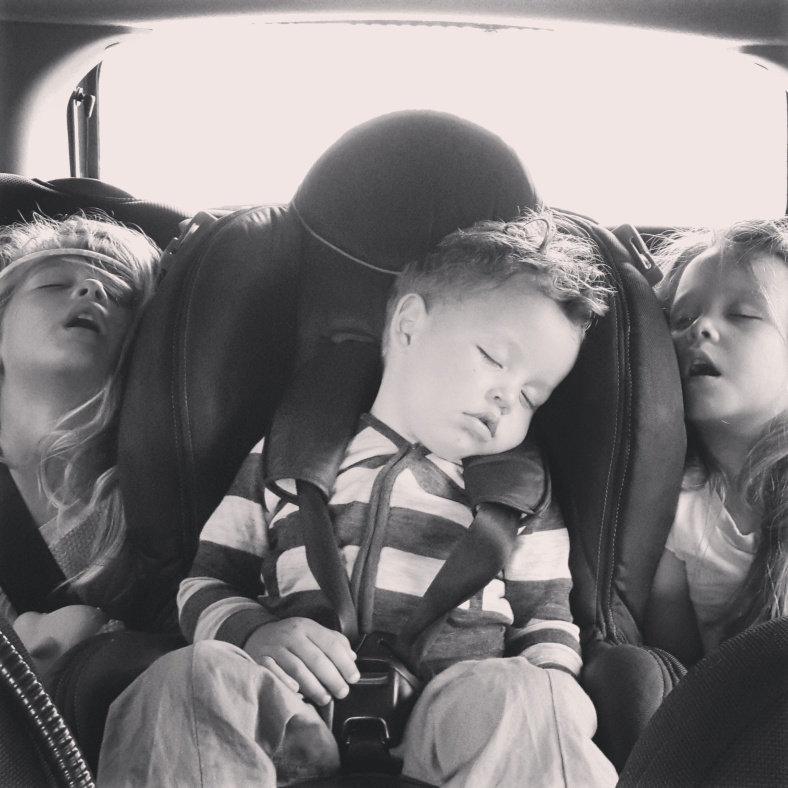 We thought we might have a chance at a night filled with series and cuddles.  I was so excited that I almost prematurely did the victory dance in the garage.

Seth removed Kyla and popped her in bed while I carefully untangled Knox from his car seat.  I cradled him in my arms, walking carefully up the rather steep step of our deck into the mine field that is our house.  After scanning the passage for any potential lego mines or other discarded toys that turn a simple walk into a trip into the wild.  There was nothing.  I let my guard down and at that precise moment my barefoot stood in a pool of dog spit.

Let’s quickly break and let that sink in.  A pool of dog spit.  What is that even?  And why is it in my passage?

My foot slipped and for a millisecond I thought I recovered.  But I didn’t.  Not even close.  Instead I tried not to shriek as my right foot performed the splits that the rest of my body was not prepared for, leaving my knee to break form and smash straight into the floor.  Luckily for Knox my maternal instincts kicked in and instead of letting him follow my knee in pummeling into the floor, I let my face smash into the wall to protect him, followed closely by my elbow which now has a layer of skin missing.

OK, that might make it sound like I knew what was going on, when in fact I had no idea what the hell was happening until Knox woke up screaming in my arms.

Needless to say that an early night was most definitely out of the question.

18 thoughts on “There Are Times That I Get It So Right, But This Is Not One Of Them”