In case you were wondering about adding a pet to your life, let me give you a little heads up – DON’T!  I mean I love them and stuff, but they are so needy.  Food, water, cuddles – enough already.

I’m only kind of joking.  I really do love them and they really are needy, but they aren’t going anywhere.

At the old house we never took them for walks because they just can’t be trained to walk on a lead, but also our neighbourhood wasn’t the safest.  One of the reasons we went for our new house is all the space that they would have in the back garden and the ability to take them for walks every day in our new safer space.

This was in theory anyway.

Seth went through a phase when we just moved here where he would put on his wellies, his coat and take them out for a stroll just after the sun came up in the morning (he even had a stick).  Sometimes if one of the girls were awake already, they would go with him.  Even though I wasn’t there, the image that I conjured in my head just seemed amazing.  BUT life got busy and now it just doesn’t happen that often anymore.

But then we decided to take a family stroll one afternoon.  We decided to make a pit stop at a nearby park to let them run out some of their energy. 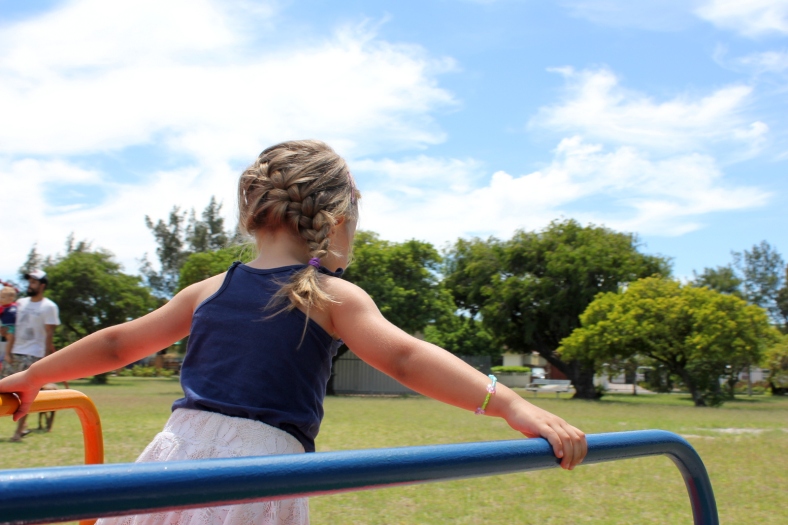 Then we started walking.  Seth with the dogs, me with the pram with Kyla and Knox in it (we have a monster double pram) and Riya riding her tricycle.

Crossing the first (usually very quiet road) was already enough for me to want to turn around and go home.  Seth was undeterred and rather irritated with my lack of adventure.  So we perservered.  By the time I finally got the flipping pram up the flipping pavement on the other flipping side, with only just saving it from toppling over to the side, I managed was regretting my stupid decision to continue.

So we decided that instead of just a random walk around everywhere, we would just go around the block.

Once we had turned the corner, so did Riya’s desire to want to ride the tricycle.  She let us and the entire neighbourhood know that she DID NOT WANT TO RIDE THAT TRICYCLE!  We stopped, tried not to freak out and re-evaluated the situation.  So I took Coco and held Ri’s hand while Seth navigated the pram with Knox and Kyla in it, with the tricycle hanging off the back of it and the most untrained useless dog on the lead.

Is there any point in saying I won’t be doing this again in a hurry.

One thought on “Dogs Are Hard Work – They Need Like, Attention And Stuff”