So you know there was this one time that I considered getting all my children into modelling, because they are the most beautiful babies in the world.  I swear I’m only slightly biased.

Anyway, after reading the comments it made me consider all the not so fun side of things, of which the main concern for me was that we already don’t have enough time in our day to do important things – nevermind unimportant modelling things.  I didn’t want to create and extra thing in our lives that we had to “do” and attend, I was already so overwhelmed with what we already committed to so I dropped it.  Never to think about it again…

That is, until I had this conversation on FB… 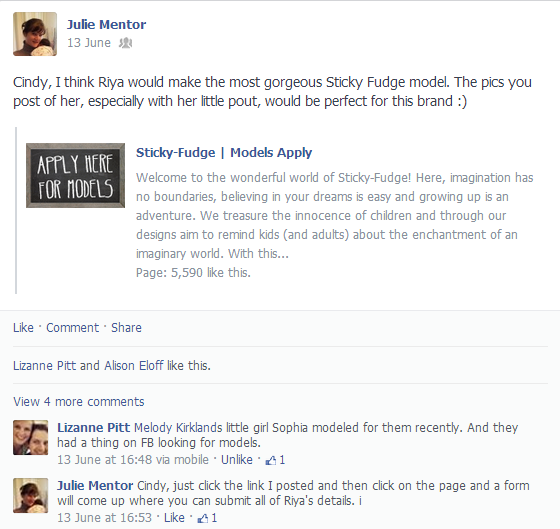 I sent in the details of all the kids, never even thinking about it again.  Until the end of last week…  When Sticky Fudge announced on their FB page that they would be getting into contact with the chosen models early this week.  It kind of peaked my interest, but what are the chances that they would actually choose on of my beloveds?!

Well it turns out that the chances are pretty good because they want Riya to come out and do the shoot!

Oh my goodness me.

So many things rolling around my head now.

The main one being, whether she would even get into the clothes, or do anything they ask or you know scream her head off and want to run away (I will be there though, so she can’t actually run away).

The other very pressing concern for me is that Kyla was not chosen.  This sucks.  Big time.  Currently my plan is to take her out the following day, or later that same day, for just the 2 of us to go and get some ice cream.  Could this be enough?!

5 thoughts on “Oh My Wordy Word. Here’s Something I Never Thought Would Happen!”