Yesterday my little girls started school.  I can’t believe I have just written those words.

The night before I spent hours packing their bags and making sure that everything that was on the list was present and accounted for.  I planned their outfits and packed their lunches.  All in anticipation of a smooth morning of arriving early and getting them used to their surroundings before just abandoning them.

And so the morning began…  At 6:38.  I remember the exact time because it was about 38 minutes later than I wanted to get up.  Well more of a clarification is that Seth got up and showered, then I woke up when he walked into the room and shouted at me.  Oh well.  At least the kids were still asleep and we could get ready without too much interruption.  Finally we got the girls and and started getting them dressed – in totally different outfits than what I had chosen for them because obviously they were not good enough. Just as we were almost ready I gave Knox one last feed and he vomited ALL over my pants.

Finally we got we were all ready and so we did a few before school photo’s: 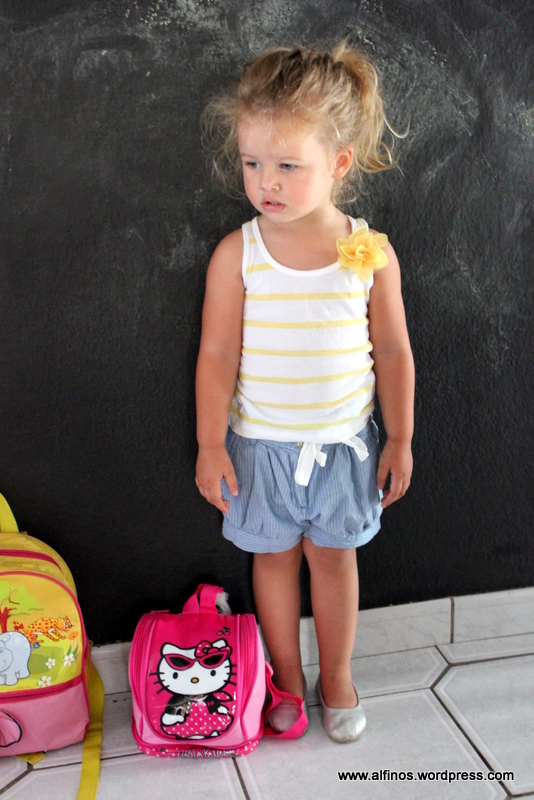 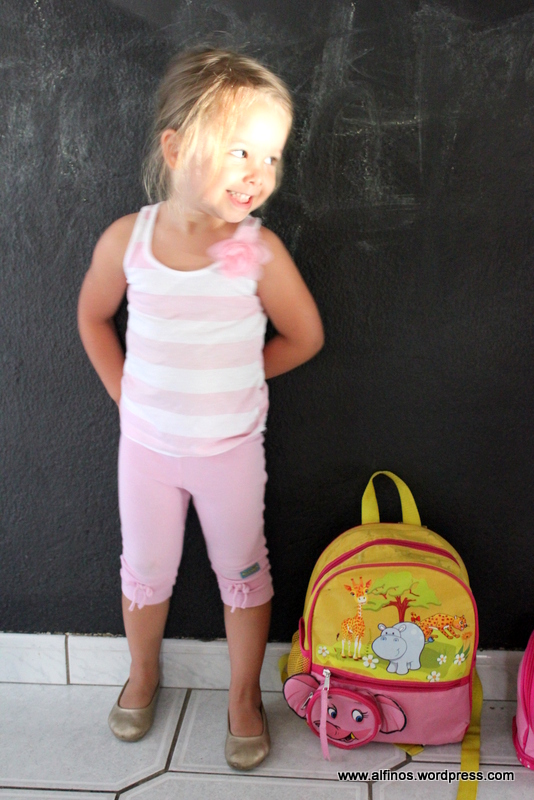 Then it was traffic, another story about Kyla and Riya really enjoying school and parking and we were finally there.  Got the girls out, put the work bags in the boot, unstrap Knox to put him in the wrap, pick him up and there is poo all over my hands!  All over…  Seth makes fun of me saying that I just stood there with my hands out, brain working but body not doing anything.  Eventually he just put Knox on the grassy side walk and changed him while all the other prepared parents walked passed us staring…

We had to walk a fair distance from the car to the school and then decided to take Kyla in to her class first.  We walked in and her teacher took her to her peg to hang up her bag.  As she hung it up Seth noticed how much she was shaking – poor poppet.  She spotted the playdough on the table and she was a for away, not even really looking up to say goodbye. 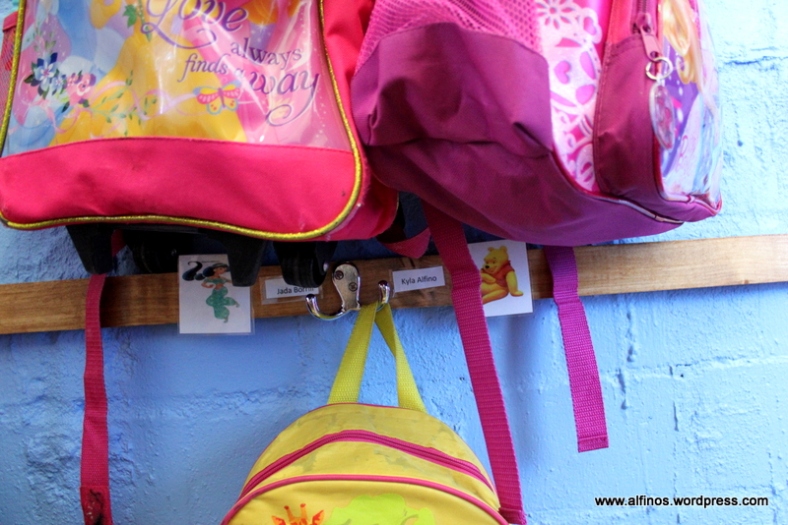 Now it was Riya’s turn…  We walk into her class and half of the kids are screaming like crazy, literally snot and tranne running riot all up in there.  I felt her cling to me more as we walked around trying to find her peg and once we found it the huge grin that she had when her bag went on it made me confident that maybe this could actually be possible.  Once she saw her playdough she sat down immediately and started to punch circles into it with the rolling pin.  After a few cuddles and some kisses blown from the door we left.

We had absolutely no tears.  From anyone.

I couldn’t wait to go and fetch them and hear all about their day.  We got Riya first and the beaming grin that she gave us was just so precious I could eat her up.  And when we got to Kyla we walked in to find her talking to her teacher – something I didn’t think she would do for a long time.  Apparently they both did really well.  Except for after they got to play together, separating them ended with a lot of tears.

In the car we got the run down on the day – Kyla painted, ate all her yoghurt, heard a story and didn’t eat anything at all.  (Just a side note, it was really difficult to ascertain what was real and what wasn’t – anyone else have this problem?)  Riya made friends called, “fwends” and they even changed her nappy.  She ate her pasta for lunch but didn’t want the cheese and she didn’t paint.

And there you have it – the first day of school is over.  What I’m more worried about is the couple of weeks thereafter.

8 thoughts on “And They’re At School!”