OK.  I know that this is technically a stupid question, because eventually I WILL go into labour somehow, but what do I do when it actually happens?!

This week I have had the girls at home by myself on Monday and most of Tuesday after a jam packed weekend of painting rooms, family baby showers and a sick toddler.  To be honest, I am feeling sorry for Ga who has to look after them all the time, but also I actually enjoy being alone with the girls in our own space.  Getting to know each other better and having some fun together before Thumper comes.  (Sjoe that was close.  I almost wrote his name out!)  It’s been a really great and rewarding time, although I have to admit it has been really tiring too. 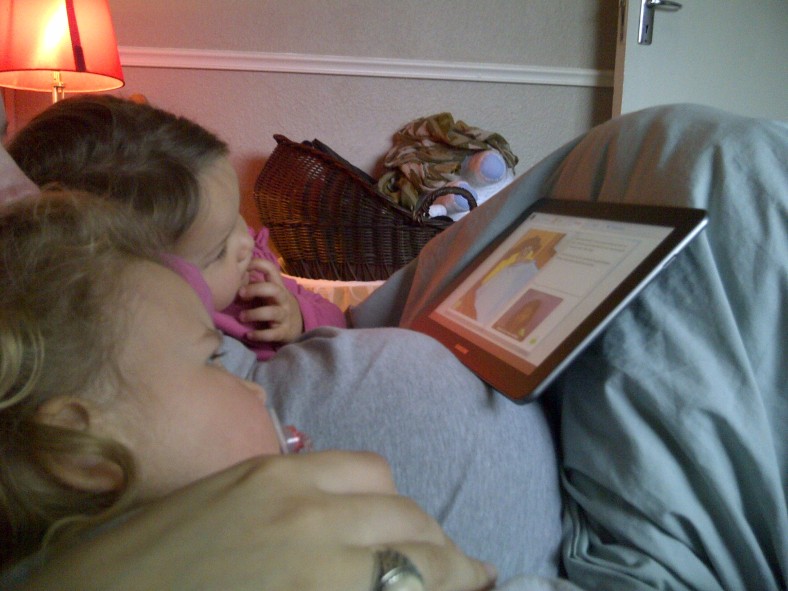 All three kiddo’s having a story read to them on the tablet.  Height of laziness I tell you!

But it means that I am home alone should something happen.  When I chatted to Seth yesterday morning, he looked at me really weirdly when I suggested that maybe I should drive myself and the girls to the hospital.  And yes, in hindsight I guess that is a stupid plan, just imagine how steering would be affected with each contraction – it might be funny actually, if it wasn’t so life threatening.  So now the deal is to call him and have him race home like a manic so that we can get to the hospital in time.

Not that I’m really worried about getting there in time.  My labour with Kyla started at about 3 in the afternoon on the 13th and we only had her at 6pm on the 14th – that’s 27 hours people.  And with Riya, even though I was induced and I had all those extra hormones pushing the process faster, it still took a good 14 hours to happen.  I know it’s the third one and there’s the joke that I will just sneeze and have him walk out – considering how Riya delivered herself, but that is really not what I am concerned about.

My main fear this time around is that I won’t get an epidural.  Seriously.  That’s all I’m worried about (besides some other things that I won’t let myself think about like losing the baby or that he will be sick in some way).  I constantly wake up from dreams in a cold sweat, where I had to push a baby out without any drugs.  It’s so bad that in one of my dreams I dreamt that the Doc could see from my face that I was not in good shape and so she made me go to sleep and just took it out for me, to “make it easier for me”.  Thanks to my friend Kirsty who didn’t get her epidural in time to deliver her beautiful baby girl, I have had this fear sitting at the back of my head ever since.  She was a trooper and totally owned that birth, but I don’t think that I could do it.

You see, I am the type that has a very, very low pain threshold.  Like really low.  The other day Riya smacked me across the face by accident with her doll and I burst into tears.  It could have been the preggy hormones, but I doubt it.  I am worried that if I am forced into a natural labour I will end up stressing out so much that Thumper will go into stress and we will end up with an emergency ceaser.  I mentioned that I don’t have a real plan in terms of birth, but I would prefer not to have to do an emergency ceaser with a stressed out baby.

That being said, if they can get me a spinal block to get me into emergency ceaser they should be able to give me an epidural when I ask for it right?