Believe it or not, our girls are a year and two weeks apart – exactly.  Kyla turns 3 on 14 July and Riya follows shortly thereafter by turning 2 on 28 July, they aren’t quite Irish Twins.  If you’ve seen them briefly for the first time you would probably ask what we are asked about 30 times every time we venture out of the house, “Are they twins?”.  Even when I say no, I can see the doubt on the peoples faces…  I can see they are thinking, “yes they are, I don’t believe you – the mother that just happened to birth them and should kinda remember.

For this very reason, I try and highlight their differences and try and avoid putting them in the same clothes.  But sometimes I don’t dress them (when they are Ga’s house during the week) and then they often look like this and then I guess I don’t blame anyone for asking.  Plus the fact that they are the same height and wear the same size everything – including shoes.

Can you tell that Kyla did her own hair?  Or that I am not allowed to tie Riya’s hair up. No. Matter. What.  It is one of the most frustrating fights that I have with her.

I also will not take responsibility for the Crocs…  If I could have my way they would never, ever have come into my house.  However, this was beyond my control as they were a gift from Ga and they will not take them off…  Literally.  Riya wanted to wear them to bed the other night!   Aaaaah!  The person who invented Crocs should be fed to a group of real crocs just because I have to look at these ugly monstrosities every day. 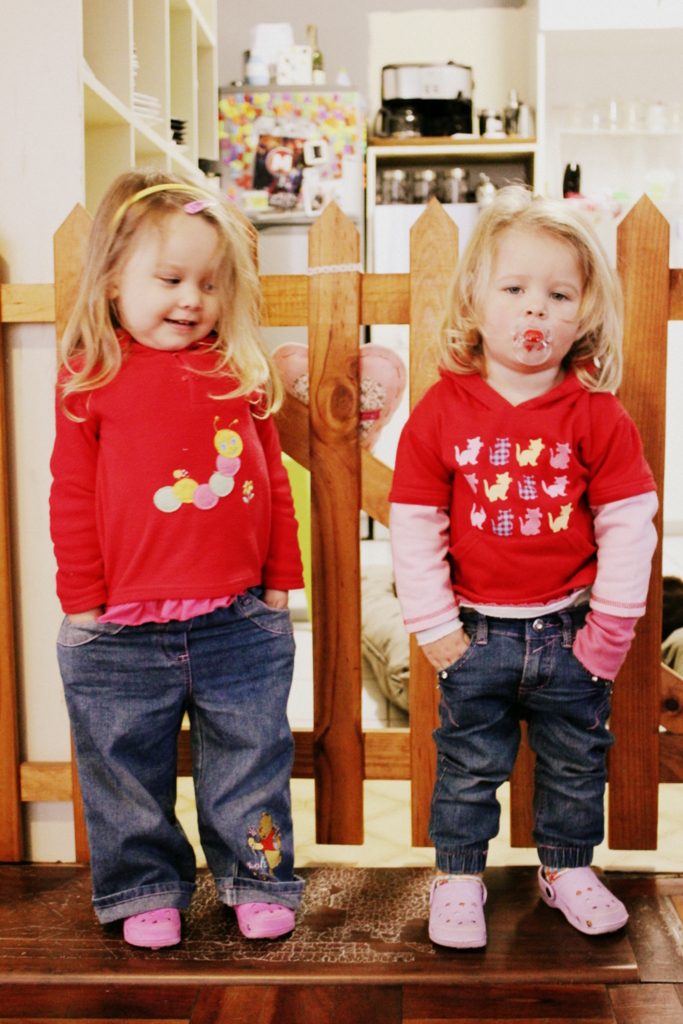 How gansta does Riya look?!  The kitty’s are a front, she’s about to pop a cap in yo ass.

3 thoughts on “No Wonder People Think They Are Twins”