I don’t understand it.  I just don’t.  Why would anyone hate to sleep so much?  I love sleep, I think I could sleep forever – before I had kiddies I thought I needed 10 hours at night to function like a normal human, now with only about 4-7 hours a night I see that I was mistaken.  But then again, maybe I am not as “normal human” as I could be with more sleep, but at least I am a functioning Mom in the meantime. 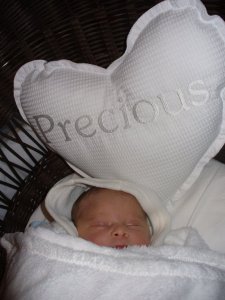 Anyway, this is not about me.  It’s about Kyla who passionately hates sleep (she probably gets it from her dad).  It started at about 4 months, coincidentally the same time that I went back to work.  I don’t know if it was because there were more people involved in her sleep time routine now and did things differently or because she is  just plain psycho.  We have tried everything!  In the beginning I justified putting her to sleep in my arms at night because I didn’t see her in the day and it was our bonding time, but I think that just made it worse as she cannot go to sleep alone (I know we have set ourselves up for trouble here and are already experiencing it).  We then tried the “cry it out” method which I hated with as much passion as Kyla hated going to sleep.  She would cry till she vomited up her entire supper, all over herself, her crib, me, Seth and anything else that was too close.  We eventually gave that up, but I think we broke her trust.  We also tried putting her in the crib and sitting with her, giving her a toy, music, ticking clock, and I can’t even remember what else.  The most successful was cutting her sleeps down to one a day, she would go to sleep in 5 minutes – but she would wake up during the night for like 2 hours.  Now if she is not CRAZY tired it often takes us hours to get her to sleep.  She will fight, scream, kick, hit, cry, wriggle, throw her dummy on the floor etc. 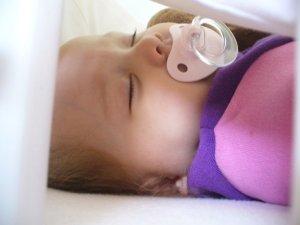 Last night for instance was another killer.  She woke up from her afternoon nap at 2, so we planned to get her into bed at 7.  Seth sat with her from 7 till about 8.30, she had fallen asleep in his arms about 3 times, but everytime he placed her into her cot she would wake up and he would have to start all over.  We then tagged teamed and I took over.  I eventually got her to sleep and put her into her cot.  She then woke up.  So I thought “stuff it” you are going to sleep in your cot “by yourself”.  So I leaned over and held her hand while she lay there.  She then proceeded to fully wake up and wouldn’t lie down again.  I told her to lie down and gave her a few smacks but nothing worked.  Eventually I said that if she didn’t lie down and go to sleep, I was going to leave the room.  She just sat there and so I left.  Before you think I am just being nasty and that she can’t understand me as she is only just under 15 months – you would be surprized at how much she understands so I know she can, but she is just being sinful and defiant. Eventually after I thought she had gotten the picture and that she had cried enough, I went back into the room to console her.  As she had completely drained her bottled before, we thought she may still be hungry, so we made her a bit extra.  Once she had finished it, she cuddled into me and fell asleep.  VICTORY!  So I put her down, put on the monitor and came to the lounge to have some QT with Seth – by this time it was 9.30.

We then got everything together to watch our movie and as we got about 10 minutes in Kyla woke up again…  This happens often and normally we just give her her dummy and she goes back to sleep.  Not on this occasion.  She was hysterical!  Literally going crazy and completely inconsolable.  She is currently teething, but we had put off giving her anything earlier that evening, as she had just recovered from a chest infection that she had to take meds for and we didn’t want to keep giving her things.  Armed with my syringe I went into the warzone to give her some Panado.  Kyla is probably the only kid I know that likes to take medicine.  She actually gets excited to see the syringe!  Crazy!  But she wouldn’t even calm down enough to look at the syringe and when she saw it, it made no difference to her hysteria.  Now we knew from experience that hysterical crying only leads to one thing – vomit!  Out it came in torrents, luckily by then I had moved us into the bathroom.  Eventually after bringing everything up all over herself, me, the bath and the floor she settled down.  While Seth diligently cleaned up the bathroom, I changed her (and myself) and managed to give her the Panado.  After singing to her for a while she finally settled and went to sleep – at 11pm!!!

Another time I was up with her for literally 3 hours.  I got through the whole “99 Bottles Of Beer On The Wall” song, seriously all the way down to 0 and sang Ancient Of Days about 20 times, then finally finished my concert with Silent Night about 10 times.  It’s amazing how my mind cannot think of any other songs at that stage but as soon as I walk out I start humming another cooler song.  Following that evening I lost my voice – ha ha ha. 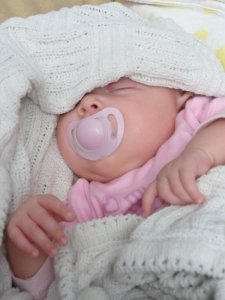 These times really test my patience, mental and emotional control.  Although this all seems to much and crazy that we would even put up with it (I don’t know what else to do anyway), they have also offered up time for me to sit in prayer with Jesus and thank Him for the amazing gift of these beautiful children as well as many brilliant/cute/loving/precious/hilarious moments as she is often her cutest when she knows she is supposed to be going to sleep.

Sometimes within these trying times, you can either snap and get so irritated that you have to get out of there or you just laugh about it.  The other night I couldn’t help but just laugh with her.  Seth had already been in there for about 40 or so minutes and he had reached the end of his tether as she had again been asleep a couple of times only to wake herself up.  It was my turn to try and coax the little monkey to sleep.  She didn’t want me to lift her out of her cot, so left her there and sat on the chair next to it gathering my thoughts to try and put on my strict face (it’s totally .  She was standing looking at me with her dummy in her mouth, then all of a sudden she broke into her biggest, cheekiest, cutest grin.  I couldn’t help but smile back and put my face up against hers.  She then bent down and looked at me through the cribs’ slats, and when I bent down and put my face there too she broke out into beautiful little giggles, she would then stand up and when I moved my face up she would laugh again.  Both of us were laughing and then all of a sudden she grabs the top of the cot and leans back and does her “I’m Killing Myself” laugh.  This is one of my favourite Kylaisms.  Normally she will bend forward and pretend to be absolutely killing herself laughing (in complete silence) while shaking her shoulders.  We both then burst out into real laughter and eventually she fell asleep.

It’s often also the time that I get the most spontaneous dummy kisses – these are precious as Kyla does not give kisses away at random, you have to earn them (I suppose I should be glad as she will hopefully keep this up into puberty).  One night she grabbed my face with both hands and just kept giving my kisses, over and over.  Too lovely.

There have been many special moments like this and I am sure that there will be many to come.  I look forward to them even if they are interspersed with pull-my-hair-out moments.  I love you so much my Kyla Monkey. 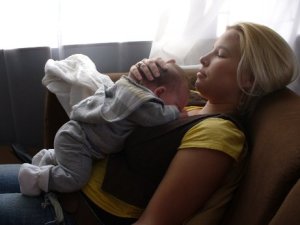 2 thoughts on “Kylaisms – How Can Anyone Hate Sleep So Much?”